The following post is adapted from a short talk I gave to first year fine art students at Loughborough University about using sketchbooks.

I use sketchbooks on a daily basis to help me make my paintings and maps. They’re a place to plan, play and practice. Work in my sketchbooks is always in beta format and is unlikely to be a finished piece of artwork. Sketchbooks are most definitely working documents.

A sketchbook is a place to keep notes.
My map making relies heavily on research. I tend to write notes by hand because I retain the information much better. I can also see the shape the words make which is really important for notating my maps. 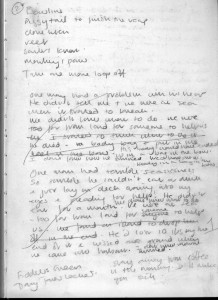 Notes of collected data (overheard travellers’ tales) from residency on board a sailing boat.

I also use sketchbooks as a place for work/life notes – shopping lists and to do lists. They’re mundane but absolutely necessary for me to organise myself so I can continue my practice. 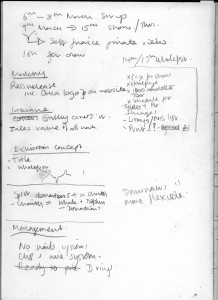 Notes taken in preparation for ‘The ‘Whaleroad’ exhibition.

A sketchbook is a place to plan and make preparations.
I use it to sketch out ideas and play with composition and format. It’s absolutely vital that I allow myself a place to safely make mistakes. Nothing looks perfect. I don’t want to spend too much time ‘finishing’ something – the vitality of the image should go into the final pieces and not be sucked up by the sketchbook. 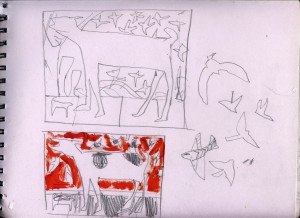 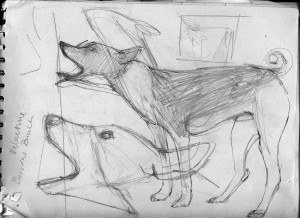 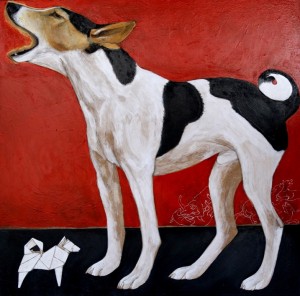 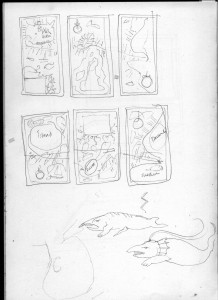 Sketches in preparation for ‘We Dream of Blue Whales’

A sketchbook is a place to play and practise.

I use it to practise my observational skills. I belong to a group who go drawing once a week in pubs. The venue changes every week and is announced on the day via Facebook. It’s open, drop-in and free. I find it a refreshing antidote to life-drawing which has always been part of my practice. 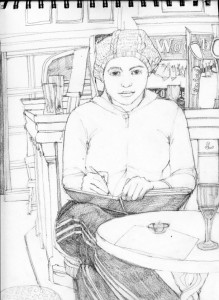 I draw the other group members … 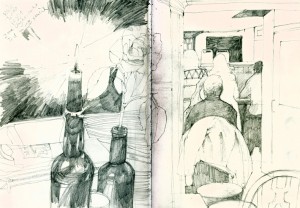 I draw the pub architecture and environment…

But I mostly enjoy the jeopardy of drawing the punters. Often they are fairly animated or they might get up and move around or leave. (My sketchbooks are full of half finished drawings.)
They might be pissed off if they realise I’m drawing them… 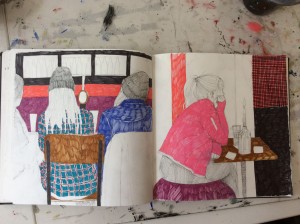 The girl in pink walked out… 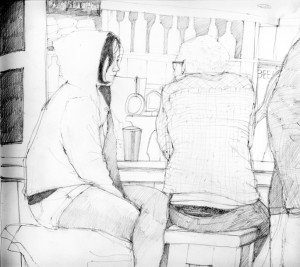 They wanted a photo of the sketch…

I regularly use biro. Committing to a line becomes much edgier because I can’t erase mistakes. I have to embrace them as part of the drawing, go with it, draw round it and carry on. There’s no photoshopping or whitewashing. No aesthetic propaganda. No safety belt. It doesn’t matter if it’s not perfect. 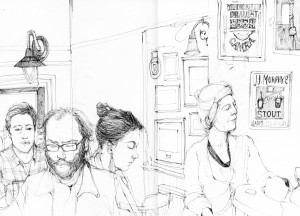 I have practised the ability to shamelessly draw without self consciousness in public spaces with lots of activity going on around me. 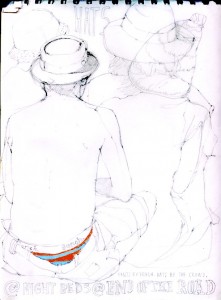 Sketching of audience members at End of the Road Festival 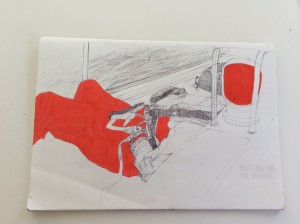 Summing up:
I use sketchbooks to keep notes, make plans and preparations and to play and practise in.

It’s really important to have a place where I can work freely, without fear of judgement, make mistakes and not care about perfection or correction. When sketchbooks are consciously curated or edited for presentation to other people, (when the mistakes, the half finished drawings and the to-do lists are erased) they become Artists’ Books – where the book is intended as a work of art in itself or a means of presentation to ‘show your working’. Personally this feels like something very different to a sketchbook which, at heart, must be considered a work tool and I think it’s vital to understand the difference between the two. 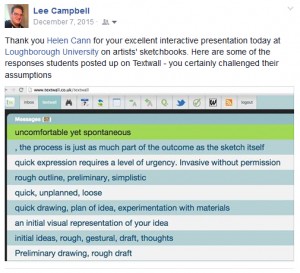